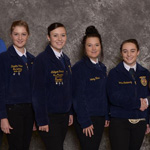 The Cheyenne Frontier FFA Horse Evaluation team coach reflects on the hard work that lead to their recent win at the 2016 National FFA Convention.

Backstage at the 89th annual National FFA Convention, the Cheyenne Frontier FFA Horse Evaluation team patiently waited for their names to be called. At that point, they knew they had placed in the top three. However, they did not know they were about to be named the national champion team until they heard their school’s name announced and were ushered on stage.

Having taught agriscience students and training career development teams for 10 years, Joe Allen, Cheyenne East High School Agriscience Teacher and FFA Advisor, has experienced his fair share of success and loss. However, the moment his team was named national champions will be a moment he will never forget.

Cheyenne Frontier FFA has taken their performance to the next level by combining formal instruction and experience-based learning applications. In previous years, Allen’s team was limited to only viewing horses during practice. This year, with the implementation of the iCEV online platform, Allen was able to assign video judging classes for his students to view independently. Additionally, the team turned their study into an interactive experience by regularly watching the videos in the classroom.

“If you’re in a contest, there’s no talking. With iCEV, the girls could sit and talk about the classes while we watched them,” Allen said. “I think what really helped them build vocabulary was hearing each other talk about the differences in the horses.”

In addition to fostering collaboration, Allen utilized iCEV to gain access to a diverse range of material previously unavailable to them.

“The thing we’ve struggled with here in Wyoming is, although we can find a pretty good supply of quarter horses, when we’re trying to look at thoroughbreds or saddlebreds, our options get sparse,” Allen said. “The most important part of training a team is having a vast selection of all performance styles, but when we would go to local places, we’d typically see just halter classes.”

That’s when Allen turned to iCEV to supplement the materials they lacked locally.

“We can look at pictures of animals all day long, but actually watching them move is really important,” Allen said. “The video component is a lot more valuable than all of the other resources that are out there."

Between other extracurricular activities, commitments and school work, a common challenge that many advisors face while training a team is finding enough time to practice. Allen alleviated this issue with the use of iCEV outside of normally scheduled practice times.

“For my CDE teams, iCEV has made a world of difference. I really think it has helped them be successful, not only because it's easy and organized, but because of the fact that they can access it outside of practice times,” Allen said.

The opportunity to gain a sense of responsibility when it comes to their performance is beneficial for both the students and Allen.

“It’s an important employability skill to be able to assess yourself and see where you need improvement,” Allen said. “It puts more in the students’ hands, so as a coach, I’m not having to spoon-feed them all the time.”

With pending budget cuts looming over the already underfunded Wyoming education system, many school districts are unable to provide full-time agriscience teachers for their Jr. High agriscience classes. To combat this problem, schools often set up exploratory classes where students learn the course material on their own. In Allen’s class, student access to iCEV creates a more cohesive learning experience.

“I used to just give them websites and worksheets, and now I can give them a more organized and thorough lesson,” Allen said. “There is no doubt in my mind that it helps students, and after my free trial, I contacted our CTE director and told him that we had to have iCEV. The more resources you can put in their hands, the more it helps them”

Allen utilizes the functionality of iCEV’s platform to easily organize the applicable resources to his students. This allows Allen to customize which projects and worksheets are available when covering various topics.

“If there is a project or something that’s not applicable to our situation at the current time, I can just turn it off and they don’t see it,” Allen said. “Sometimes kids get a little bit distracted by too much stuff, so if I can take away what’s not relevant to us, that’s pretty valuable.”